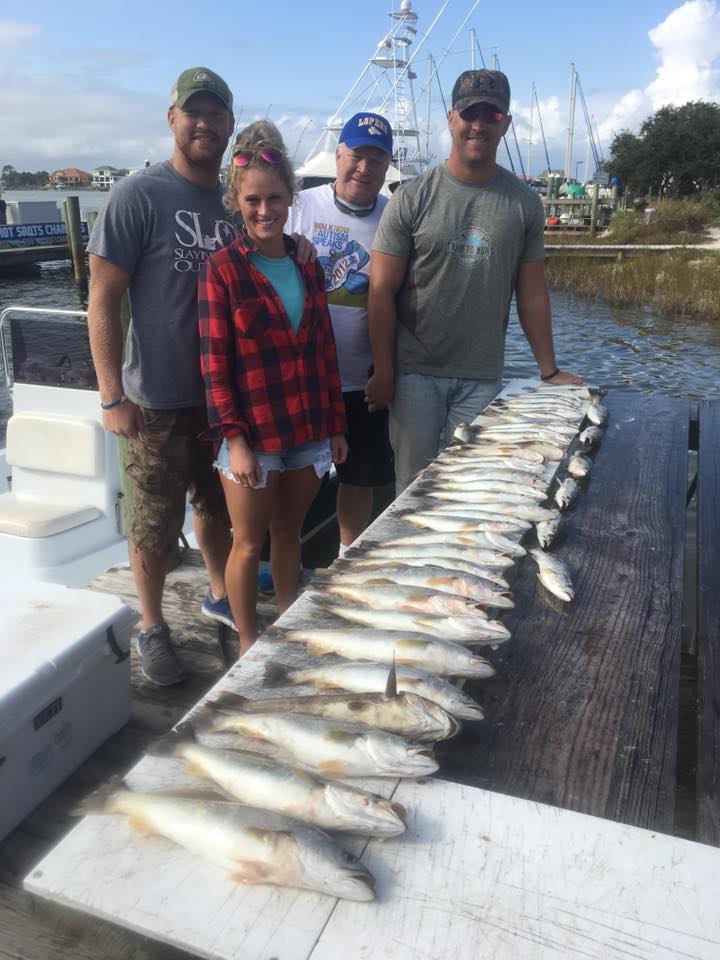 Inshore
Speckled trout fishing has been decent and if you’re after the big ones then February is one of the very best months of the year to fish. As I’ve said since the beginning of winter you’ll want to look for them in the local bayous, canals, and rivers.
Anglers are catching a good number of white trout around the Pensacola Bay Bridge. The most important key to catching them is going when there’s some good moving water so be sure to check the tide chart before planning your trip.
Bull reds have been a bit tougher to find lately with all of the wind and rough weather, but there should still be plenty around, you just might have to invest some time tracking them down.

Offshore
It’s not going to be slick calm, but according to the current marine forecast it does look like the next couple of days will be fishable for anyone who’s been waiting on a chance to get offshore.
There’s no doubt about it that amberjack is your best bet for some good action offshore right now. If you can find some live bait you’ll definitely want to take advantage of that, but you can also catch them using vertical and diamond jigs
Just a reminder that red snapper, triggerfish, and gag grouper are all currently closed in both Florida state waters and federal waters in the Gulf of Mexico.

Piers & Beaches
The Pensacola Bay Fishing Bridge continues to be the good spot for landlocked anglers. White trout and redfish still are the primary catches during both the night and daytime.
Fishing continues to be pretty slow on both the Pensacola Beach Gulf Fishing Pier and Navarre Beach Fishing Pier. Bonita, redfish, flounder, and bluefish are possible catches out there, but don’t set your expectations too high.

Freshwater
It doesn’t sound like fishing for any particular species on the local rivers has been great, but anglers are catching a few large mouths, hybrids, stripers, and crappie. We should still see some decent hybrid and striper fishing if the weather ever gets cold again.